What is Web Server?

No Comments on What is Web Server?

Do you know what is Web Server? Whenever we interact with the Web, we are, in some way, interacting with a Web Server. Whether by accessing a page, sending a form, sending emails, interacting on social networks and others.

So, without a Web Server, the internet would probably not exist as it is today. However, there are two interpretations for the Web Server. In one of them, it refers to the server in physical format (Hardware). The other definition is related to programs (software).

Therefore, in this article, we will learn all you wanna know about it! Let’s see whats is a web server, the difference between de HardWare and the Software, whats is the most used Web Servers and his characteristics.

So in this article, we’ll look at the following topics:

What is a Web Server?

The definition of“Web Server” can be related to both the physical format (hardware) and the programs (software). In general, a Web Server can be defined as a computer optimized to host something on the web. Therefore, the definition can also refer to hardware and software, at the same time.

So, the Web Server is a computer, where his architecture is optimized to be a server. In it, we find parts common to personal computers, such as HD, motherboard, processors, RAM memory and others.

This machine must store all the content of the websites or applications, in addition to the programs responsible for the communication between client and server. Therefore, to keep them online, they must have to be connected with the Web. It is very common to find these computers mounted in Tower format or in Racks.

Thus, you should already imagine that a server of its own has a high maintenance cost. In addition, it is also necessary to have good technical knowledge.

Therefore, a more advantageous and safer option is to outsource the servers through Web Hosting companies. In this way, the Web Servers are allocated in a Data Center and will be maintained by a Hosting company specialized in this.

Like any computer, the server must also have some software.

At first, it has an Operating System and can receive the installation of several other programs.

Thus, we can include software that performs communication tasks between the server-side and the client-side. For example, you can send and receive e-mails; You can access web pages, send and receive requests; you can store and supply files; etc.

Therefore, when it comes to Software, Web Servers are those programs, responsible for communicating between the server and the clients.

When we access a page on the Internet, through a browser, we are making one or more requests for a Web Server. Later, this server must interpret the requests, by the software. Finally, send the answers. That way, the browser will render the page on our screen. In the case of a website, we use the HTTP protocol (Hyper-Text transfer protocol) or HTTPS, the secure version of HTTP, to do this process. Therefore, the webserver will be a specific program to receive, interpret and respond to these HTTP or HTTPS requests.

The same can happen with other types of requests, such as FTP servers, E-Mail Servers, among others. The important thing is to know that a computer can host one or more types of Web Servers. For example, a machine with an HTTP Server can also contain an SMTP E-Mail Server.

There are several types of web servers available. Among them, there are free and paid software options. Currently, the most popular are Apache, Nginx and Microsoft IIS.

To maintain an application or website online is necessary to host it in a server. As explained in the previous topic, maintaining a server requires both physical equipment and software. In addition, it would also be necessary to keep the server on and connected to the internet constantly. Finally, good technical knowledge would be needed to administer and configure the server correctly. In other words, maintaining your own server can be an alternative with a high cost and often unnecessary.

Thinking about this problem, several companies started to build their own data centers with different servers. With that, they offer storage services on the server, also known as Web Hosting.

The Web Server Software can be offered as a part of most Hosting Services.

So, these companies are responsible for keeping their servers up-to-date, secure, connected and optimized. The values ​​of the Hosting Plans can vary between each company.

You can find several companies that offer their hosting services. Among them, CopaHost! A consolidated company in the technology and website hosting market!! We have experienced and attentive technicians. We are constantly optimizing our infrastructure! At CopaHost you can choose from several hosting plans! So don’t waste time and choose the one that best suits your needs! 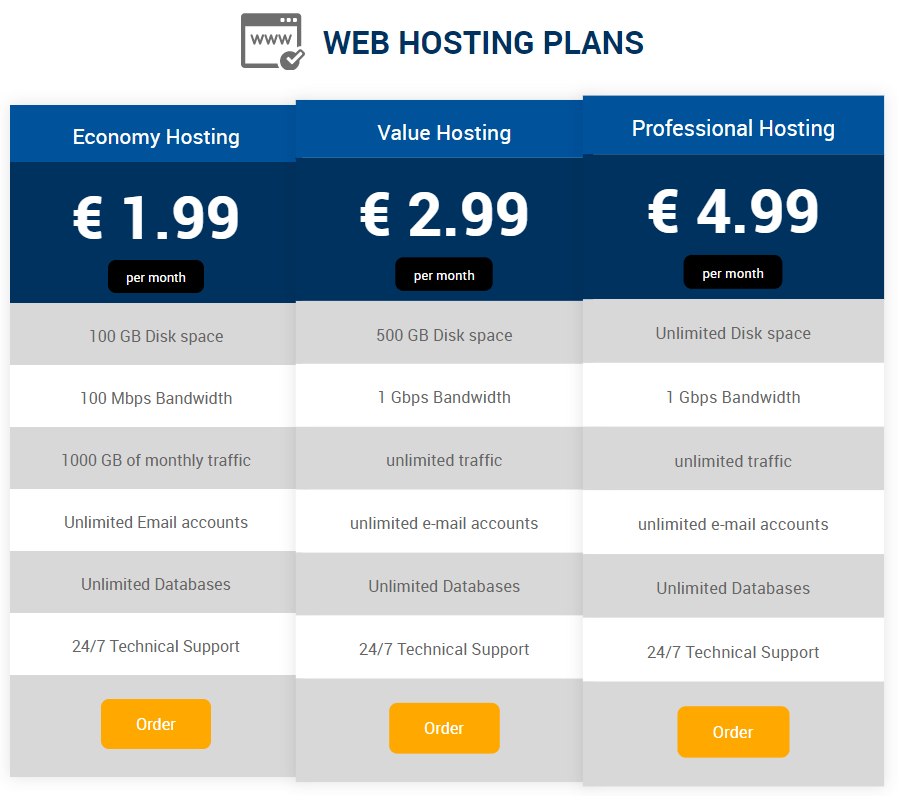 When choosing a server you should also pay attention to which Operating System your machine must-have. Your Web Server software must match your Operating System. The same is true for the other installed programs.

The best hosting companies use Windows or Linux operating systems on their servers.

It is very common to have a preference for servers on Linux systems. This is because there is wide compatibility of the programs, in addition to offering good security.

Windows systems are usually used only by those who aim to use Microsoft services, such as ASP.NET, SQL Server, among others.

Therefore, to choose which Operating System to use, you must know about the Web Server software you choose.

Currently, you can find several web servers available. Among them, there are free and paid software options.

The most popular servers are Apache, Microsoft IIS, and Nginx. Of the three, only Microsoft IIS is paid. So, the other two are open source and you can have them for free.

Among servers that are gaining notoriety, we can mention LiteSpeed, Apache Tomcat and Node.js.

Each server has its own characteristics. However, the similarity between them is that they have the same objective: they enable communication between the server and the client.

So let’s learn a little about the most popular servers, Apache, Microsoft IIS, and Nginx.

Used mainly on Linux, Apache is currently the most popular Web server in the world. Major server technology companies often use it. Known as Apache or Apache HTTP Server, it is open-source software, completely free. In addition, it is multiplatform. So, you can use it in different Operating Systems, such as Linux and Windows.

This server can be highly customizable. It has a structure based on modules so that you can freely install, activate and deactivate features and functionality. Among the main modules, we highlight those that are focused on security, cache system, password authentication, and URL renaming.

With Apache, you can have a secure website without having to be an expert in Web Servers. In general, you can configure the server easily. Because of that, Apache is one of the preferred Web Servers for the owners of companies that must have a web presence. In addition, Apache can works very well with any CMS, with several programming languages ​​and frameworks.

However, it may experience performance issues on sites with very high traffic. Therefore, it is a great option for small and medium-sized sites.

Internet Information Server (IIS) is the Web Server offered by Microsoft. To run this server, you must use the Windows Operating System.

It is a server well integrated with de Operating System. So, it has all the resources, just like Apache. But, the difference is, they are based on Microsoft’s own technologies. Among them, we can highlight the integration with the ASP.NET language and the SQL Server database system.

Although your focus is on Microsoft technologies, you may be using it with other technologies.

NGINX emerged with the objective of meeting a large volume of traffic and, consequently, requests. This is an open-source web server, you can get it for free. Its differential is that you can use it as a Reverse Proxy server, HTTP load balancer and email proxy for the IMAP, POP3, and SMTP protocols.

The way NGINX works differs from a Traditional Web server. Instead of creating new processes for each request, NGINX has an asynchronous and event-oriented approach. In this way, requests are managed in a single segment.

A single work process generated in NGINX can handle up to 1024 similar requests. This way, this server can handle thousands of requests without difficulty and with high performance.

NGINX is widely used in the infrastructure of website hosting providers and also offered in services available to customers.

Due to its ability to support many high-speed connections, it has been adopted by many high traffic sites. It has also been widely used to host e-commerce and streaming platforms.

The Web Server is a term that can refer to both Hardware and Software. However, regardless of the meaning, it is a fundamental part of the Internet that we know today. Through it, we ensure that data can be stored on a machine connected to the network and that it allows this data to be made available to any other machine through the internet and network protocols, such as TCP / IP.

By reading this article, you should finally be familiar with the meaning of the Web Server. Then, you will have no problem choosing the one that best suits your needs. In addition, you now also understand how the servers contained within the hosting providers work. And, of course, this will also facilitate your choice for a hosting provider.

Speaking of Web Server, CopaHost has its own Data Center. Our servers are equipped with the latest hardware and a high-level infrastructure. In addition, we have excellent support with well-qualified technicians. Get to know CopaHost hosting plans and start your projects right now on state-of-the-art servers!